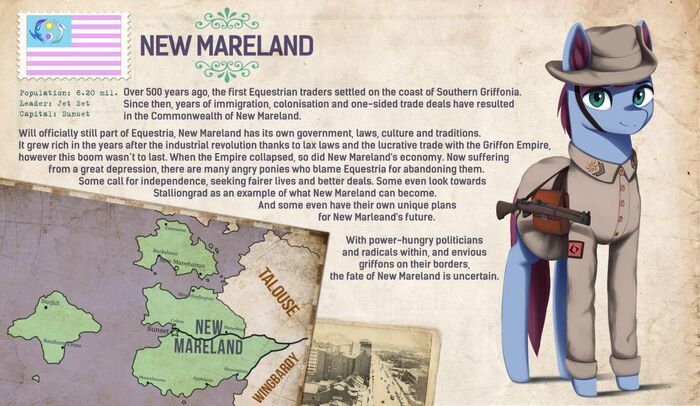 In 649 ALB, the first Equestrian traders, led by Coltlumbus, settled on the coast of Southern Griffonia and founded the colony of Celestia. Since then, years of immigration, colonisation and one-sided trade deals have resulted in the Commonwealth of New Mareland, a beacon of

While nominally still part of Equestria, New Mareland has its own government in the Commonwealth Congress and is subject to its own laws and regulations. The lax regulations in industry and employment laws, along with the valuable griffon market, lead to many Equestrian businesses setting up in New Mareland.

The New Mareland economy boomed, filled with ponies of adventure and drive, shaking off the Harmonic stagnation that plagued their sedate motherland. Even the collapse of the

Griffonian Empire in 979, which plunged New Mareland into a recession, didn’t stop their determination. Inspired by the battles of their troops against the exotic wildlife and challenges faced in a strange land, the ponies of New Mareland began to take pride in the New Mareland spirit, a unique blend of humour, optimism and stubbornness in face of adversity.

Traders turned away from Griffons towards Equestrian business, and speculative investors bought big in the hope of big payoffs in expanding exploitation of the unique potential of Griffonia on Equestria's behalf. However, it soon became obvious that Equestrian trade policy was turning inwards instead. On the 29th October 999, the New Manehattan stock market crashed. In what has become known as Black Wednesday, thousands of New Marelanders suddenly found themselves without a job and the nation's economy fell into turmoil. Many citizens turned to Equestria for help, but the homeland did little to help alleviate their problems, instead chiding them for their lack of regulations and carelessness.

Many New Marelanders, now feeling abandoned by Princess Celestia, have begun campaigning for the Commonwealth to seek full independence. This is championed by several charismatic ponies such as Gladmane, Kingfisher and Duke Haygle. However, the newly appointed Governor-General Jet Set still maintains a solid power base in the Commonwelth Congress with popular support among the ponies of New Mareland.

With support from Equestria, he has his own plans to fix the nation and maintain the status quo. The imminent issue New Mareland has to tackle is the economic depression. While many have their own ideas on how New Mareland should recover, some are more extreme than the others.

New Mareland is also a peaceful nation. If faced by a war the population will need to be rallied behind the cause, there is also a sizable griffon minority in the nation who will fiercely reject any idea of fighting in a "pony's" war.

However, New Mareland starts with a strong industrial base, particularly in its aviation industry. A strong Air Force, combined with a well dug in army, will be key in New Mareland's defence. The ponies of New Mareland find themselves in a crisis, and are surrounded by evil-minded nations in this foreign land.

Will they hold firm and survive? Or will these be the last years of New Mareland in its long history?

New Mareland starts with a very small military force - 31k deployed ponies, and only 35k ponypower spare. New Mareland cannot get additional ponypower for a long time. It also has a token airforce of 24 early fighters and a functional fleet of 9 ships, including 2 heavy cruisers, 2 light cruisers and 5 destroyers

New Mareland is a land of opportunity, depending on how the player wishes to handle their relations with their master, Equestria.

Remaining loyal gives you large bonuses to industry and research, and even gaining the possibility to act as the asylum for the Equestrian government should the homeland fall to invaders. Taking Patriation allows New Mareland to become a nation on its own, ready to take on the world on its own.

However before New Mareland can become a respectable nation, it must deal with the Great Depression and sort out the Griffon minority issues. New Mareland cannot field a proper military until war occurs, due to its blocks on conscription laws.

The loyalist path is in many ways the safest for New Mareland - maintaining Equestrian military protection, using Equestrian research bonuses and offering a shorter tree with some focuses that grant quick factories, it can be completed earlier than other trees, offering faster escape from the great depression.

Should Equestria be defeated, a loyal New Mareland will have the option to take in the Equestrian Government-in-Exile. This will grant Celestia and Luna as figureheads, providing massive stability, and Equestrian advisors if you had not already unlocked them.

This focus tree is extremely powerful, but is not necessarily enough to defeat whoever beat Equestria.

These focuses grant massive boosts to stability and war support. They add resistance ideas to whoever owns Equestria, making their life more difficult whilst at war. They equip you with a set of dockyards and some heavy ship techs.

But most importantly, this focus calls upon the Magic of Friendship. Every neutral or Harmonic Government on Equestria, and the River Coalition, will join your faction, the Coalition of the Free. You will also receive elite hippogriff units.

Pray it is enough to retake Equestria.

Choosing the independent route starts a period of political campaigning, allowing the player to build support for their ideology of choice, depending if you take Let All Have a Say. Possible candidates are:

Jet Set, former Governor-General of New Mareland, will remain true to Equestrian ideals of harmony should he win the election, opening charities and solving New Mareland's economic problems, but not quite to the level of Kingfisher's radical ideas of wealth redistribution. This path also offers New Mareland a choice between allying with Aquileia or the River Coalition.

It is most notable for its +15% bonus to construction speed, diplomatic options, and bonuses to trade with other nations.

Notable businesspony Gladmane offers a way to make New Mareland Great Again, by fortifying the borders and opening the banks to Griffon gold, giving them safety from any invaders. This branch notably gives good civilian factories, unlocks mining decisions, and dramatically reduces consumer goods. It also prevents joining other factions via the Neutrality effect. This path does not give a research slot.

Open Up Our Banks - Every industrially powerful (>14 factories) country that is in Griffonia and not Communist will receive the event to store money with New Mareland. This will grant -2% in consumer goods for both countries. For every country that accepts, New Mareland will receive an additional -2% up to -15%.

Popular governor of the state of Celestia, Kingfisher, promises to enact reforms that will make Every Pony a Princess and break up the corporate monopolies. This branch gives a lot of civilian factories and infrastructure, as well as boosts to stability. It can also access the mining decisions and foreign policy focuses.

In terms of foreign policy, Kingfisher can seek to join the Concordat of Free Nations led by the

Republic of Asterion. Kingfisher can get war goals on Communist countries in Southern Griffonia and the

Duke Haygle believes in a firmer way of dealing with the aggressive Griffon neighbors, offering a quick buildup of the nation's armed forces and industry in preparation of war.

This tree is notable most for its construction speed effects - 10% from focuses and more from BNPL bills. Its research slot focus also offers -10% research time and its military focuses give a very large 25% bonus to max planning.

Build Now: Pay Later - These bills will give a large 25% boost to construction speed and -5% to consumer goods, but will consume PP whilst active. The effect can be extended, but each time they will consume more and more political power. If not enough political power is available, the effect will end and 20PP will be charged per extension. Declaring war or having war declared on will remove the BNPL bills and the obligation to pay them back. Civil wars do not trigger this effect.

Kingdom of Wingbardy is Fascist, or he can choose to form his own faction, The Silver Crescent. Duke Haygle can get war goals on Communist countries in Southern Griffonia, the

Kingdom of Wingbardy, and the

Picket Fence is a protector of the little pone. The common worker. With regulation and by taking the bankers down a peg shall New Marelands Economy prosper! By enshrining democracy shall they remain free! And by having separate but equal segregation for ponies and griffions shall their society remaining peaceable and proper!

This path focuses on economic recovery, decentralization of democracy to the little pone and, you guessed it, segregation! You will decrease the penalties of the Great Depression like any other path, receive free civilian and military factories, 1 infrastructure in every state, an extra research slot, buffs to daily politcal power gain, stability and war support, daily supremacy support, production efficiency growth and a recruitable population bonus.

Of course, all that comes at the cost of your recruitable population factor when you institute separate (but equal!) communities for Griffions and Ponies. You can cripple your ponypower pool further by deciding bats shouldn't be around either, but if you can tolerate the leathery winged monsters, you'll get bonus recruitable population factor, monthly population growth and a hit to stability. Deciding to ship them home where they belong essentially does the opposite.

Kingdom of Wingbardy and will always form his own faction.

The Communist path may take Mareland in an unusual direction and allows the player to join a Communist faction, or create one. An event will pop up where the player can resolve debates about the direction of the Communist party, and how they shall lead New Mareland.

After this is done, the player can progress down the focus tree. The tree focuses on getting rid of the Great Depression debuff along with integrating various racial groups including the griffion minorities and thesterals. Overall, this tree gives some decent buffs, including free civilian and military factories, recruitable population bonuses, recruitable population factor bonuses, turns the Griffion Minorities debuff into a powerful buff, an extra operative slot for your Intel Agency, an extra research slot, political power gain bonuses, stability and war support, decrease to war justification time, war stability modifiers, and extra building slots in all your states.

Taking the focus The Vanguard of the Griffionian Revolution unlocks two decisions that lets New Mareland join a faction:

In terms of expansion, Communist New Mareland can get war goals on the

Kingdom of Wingbardy and the

The industrial tree is essential to New Mareland, as it will unlock new Conscription and Economy Laws. New Mareland is locked to Volunteer Only and Partial Economic Mobilization.

Industrial Support Fund and National Census paths contain a series of basic industrial focuses with new factories, infrastructure and research bonsues. Most importantly, it is one prerequisite for Economic Recovery, which will remove the Great Depression and unlock Full Economic Commitment, which will allow full change of economic laws.

Defense of the Commonwealth Act is a critical focus that locks the right third of the industrial tree. It is only unlocked if New Mareland is at war, world tension is over 20%, or if the Fascists or MARESOC have taken control. Under this side of the industrial tree is the focus National Mobilization Act, which will unlocks conscription laws; it requires New Mareland to be at war or no longer harmonic.

New Mareland has 4 focuses in the industry tree to deal with the Griffon problem. Only 2 can be taken, and the adjacent focuses cannot be taken. Some of these focuses will be unavailable in certain political paths, as the Griffon issue is also addressed by some political focuses in these paths.