Attention: This page is out of date!
This article is for an earlier version of this nation. Our Wizards are at work updating it, but some information is incomplete or outdated. Want to speed things up? Visit us on Discord and volunteer to help out!

This nation contains SECRETS. These are not catalogued on the Wiki. Explore and discover them all!

Feathisia is unique amongst Griffon nations - a stable, democratic, constitutional monarchy, where ideas from across the spectrum are represented and radicals remain unpopular, even among Communists and Nationalists.

Their monarch, Grand Duke Gerlach IV, is widely respected for his reasonable and consultative approach to leadership. However, the recent economic downturn in their trade partner the

Skyfall Trade Federation and the chaos in their master the

Griffonian Empire has strained a once bright economy.

Parliament is soon to meet to hammer out a solution to the crisis. Although these are hard times, observers expect business as normal to continue in politics, so long as no further upheaval occurs...

Feathisia is an ancient Grand Duchy within the

Griffonian Empire. For decades, it prospered under the rule of many different Emperors, all while enjoying its own share of relatively large autonomy from imperial rule. They became known as famous explorers, travelling the seas. The Feathisian Fleet Academy was one of the renowned schools in the world for sailors and naval officers, and the first Griffonian submarine was built there, though this tradition has languished with the recent turmoil in the empire.

As a relatively autonomous vassal of the Empire, Feathisia proudly calls itself a constitutional monarchy, with its Grand Duke Gerlach IV at the very top. A personal friend of the current emperor, Grover V, Gerlach has long supported the Empire as a catalyst for peace between the states of Griffonia, fighting against the

Griffonian Republic when it was briefly declared.

Unlike many democracies, where power is held by the current majority party, Feathisia is controlled by a coalition of parties, none receiving a majority of votes. Currently it is ruled by the LDP-FHP Coalition.

This style of democracy has kept Feathisia deradicalised, as parties must work together and keep their policies palatable for their coalition partners.

The Liberal Democratic Party (LDP - Liberaal Democratische Partij), led by Prime Minister Talonsley supports Harmonic values and the free, equal, democratic rights of citizens. They currently rule as the lead party in a coalition with the monarchist FHP, who they push back against to ensure progress and counterbalance the entrenched advantages of the old aristocracy. The LDP wish to implement an economic program of government investment, nationalising failing industries, and helping create a framework for unions and employers to resolve conflicts, whilst still supporting free markets and global trade.

The Feathisian Ducal Party (FHP - Fethisische Hertogelijke Partij) support a conservative, cautious policy, and the existing powers of the Duke and the aristocratic elite. They promise stability and moderation. Their leanings mean they are more supportive of free market, existing institutions, and wish to preserve the strength of the historically important agrarian sector. They are in a ruling coalition with the LDP, acting as a counterbalance to their interventionist pursuit of modern progress.

The Feathisian National Alliance (FNV - Fetisisch Nationalistisch Verbond), led by Anton Moldernik is a populist, nationalistic party that supports national unity and collective purpose for the good of Feathisia, led by a strong government under a powerful Duke and PM. They advocate aggressive investment and jobs programs, cracking down on foreign corporations, a more militaristic stance, and regulation against the parasitic unions. However as the Nationalist party, they number some fringe radicals.

The tide is slowly shifting against Feathisia's favour, however. The rapid decline of the Empire and the consequential economic crisis have severely weakened the moderates within the country. This has recently worsened with the strikes in the Skyfall Trade Federation, hurting trade.

With every day of indecisiveness, radicals on both ends of the political spectrum gain more support among the populace. The first order of business will be presenting the new budget to parliament, as the ministries of Finance and Economic Affairs have both finalised their own ideas on how to get out of the economic slump.

As a new age dawns upon the world, Feathisia will have to decide upon its own fate. Should the current coalition fall apart, all four parties have a chance to deliver the next prime minister. It would all depend on political maneuvering of the parties and deals being made.

The Feathisian army starts with 6 well equipped infantry divisions and 1 elite Knight division, in total of 47.3k ponypower deployed. They also have a moderate navy consisting of 1 battlecruiser, 2 light cruisers, 5 destroyers and 3 submarines.

Dealing with the Economy[]

The game starts with Feathisia suffering the Ruined Economy malus. This will effectively reduce production to zero, so the first goal is to begin removing this via the budget tree. Finishing the tree will also change Outdated Industrial Sector to Modern Society, further boosting output.

On the Laissez-Faire Policy side, the Work for the Little Griffon focus selects between 3 different options

The Investment Gamble focus offers 3 countries the opportunity to invest in Feathisia, granting them PP, and giving Feathisia an offmap factory for each that accepts. The AI will often accept this opportunity.

Regardless of the method, as you begin to approach the end of the tree and resolve the economic crisis, tensions is the Empire will likely flare up.

Crisis in the Coalition[]

Around this time, the Griffonian Empire shall select the Archon Eros VII or Duchess Strawberry as regent to the Griffonian Emperor, triggering the secession of several states. Both events pose a serious threat to Feathisia.

As a result of the crisis the coalition between the LDP and FHP shall collapse, and the player shall have to race to reform the crisis and likely prepare for war.

A new coalition must be formed to bridge parties on the left and right. Right-Right or Left-Left coalitions are not possible.

There are 4 possible alliances, with the relevant focuses shown below. An attempted coalition between the PvdA (Socialists) and FNV (Nationalists) will fail, leaving the player unable to resolve the crisis.

Once a new coalition is formed, the government crisis will end, and one of the two coalition parties must be selected to take the lead. Whichever coalition is selected will get their hidden government tree activated, and the economic tree will be unlocked. The rough bonuses are as shown below (approximate only, typical bonuses to slots, infrastructure, factories, and other minor buffs omitted). Note that all government trees include a focus to reduce illiteracy (which will be half removed after 120 days, and fully at 240) and a science slot. 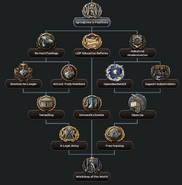 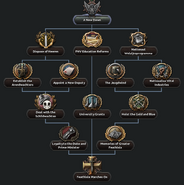 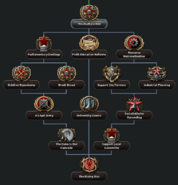 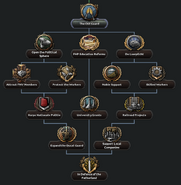 If the FNV and PvdA are selected, the two wings will grow polarised and the deadlock will worsen and radicalism will begin to stir. An assassination attempt will be made on the Grand Duke.

Spoilers below, we recommend these are best experienced in game before reading

If the Duke dies, the country will be plunged into civil war between the FNV and PvdA.

Feathisia's civil war is not like a typical civil war - the country will not be split, your army will be unaffected and stockpiles will be unaffected. The army will be restricted to the capital, having no clear source of political leadership or legitimacy, as militia battles break out across the rest of the country. These battles are initiated by decisions, and resolved by events, during which the player can decide who wins the battle. The decisions take some time and PP to complete.

There are a total of 8 conflict locations between the PvdA and the FNV. Winning 4 will end the civil war in that party's favour, and they will claim the capital. Only one battle can occur at a time, and whilst a battle is occurring, the country will have a temporary malus providing -0.50PP / day and -10% Stability.

During the civil war, the

Free City of Romau will also get an event allowing them to annex back the province of Rimau, taken by Feathisia from Romau a long time ago, in the name of protection.

End of the Civil War

The Civil War will saddle you with the crippling Ruined Economy malus. Fully removing it will take you a long time. Both factions have the reconstruction tree to do this.

Both FNV and PvdA also have science reform focuses, which will gradually reduce mass illiteracy and change the scientific development level to Developed.

All focus slowly recover stability and put the country on a politically stable footing.

All focus slowly recover stability and put the country on a politically stable footing.

Spoilers below, we recommend these are best experienced in game before reading

If the Duke survives the assassination attempt, the scarred and angry duke will declare martial law to fix the country himself, opening up a new political and economic focus tree.

The Duke, now overcome with paranoia, will end the useless Feathisian Democracy that caused the political crisis and led to his near-death experience, dissolving the Parliament and shocking the country. In reaction, the PvdA, LDP, and FNV all form Anti-Duke organizations, putting malueses across the board:

The first half of the new political tree involves the Duke ending the three resistance organizations through mass purges.

After stabilizing the country and establishing the absolute rule of the Duke, the Duke will reform the military, the education, and the government to further strengthen his rule. Perhaps most importantly, Gerlach will desire to wage war on the mismanaged states neighboring Feathisia to spread his rule to the oppressed Griffons in these countries, granting an annex war goal on the

Dealing with the Empire[]

The next step after dealing with your political troubles is to deal with the Empire. If you are unlucky, you will still be in the middle of them when war comes knocking.

If you are lucky, you can Marry the Duchess - this is an option that can be selected if LDP or FHP are dominant and the crisis has ended, it costs 300PP and will annex the Strawberry Duchy if successful (and the Griffonian Empire if Gabriella is Regent). The AI will usually accept this proposal.

Your approach to dealing with the Empire will depend on who is regent.

Fighting the Empire is a tough fight. They will have more industry and men than you, and a long border to attack across.

However, after defeating the Empire and forming the Griffonian Empire, you will gain a tree to pursue the Empire's war claims and integrate its lands.

Air - starts with a choice between focusing on strategic bombing or a doctrine of choice. Going down the strategic bombing path gives boosts towards all bomber types except naval, heavy fighters and CAS, finishing with national spirits that improve bomber attack, defence and bombing ability. Other branch gives boosts towards light fighters, heavy fighters and CAS, while also adding more air bases. Tree ends with even more air bases, rocketry and paratrooper research boosts.

Navy - standard choice between focusing on capital ships and cruisers or focusing on carriers, submarines and destroyers. Ends with adding more dockyards and naval bases, followed by marines and landing gear research boost.