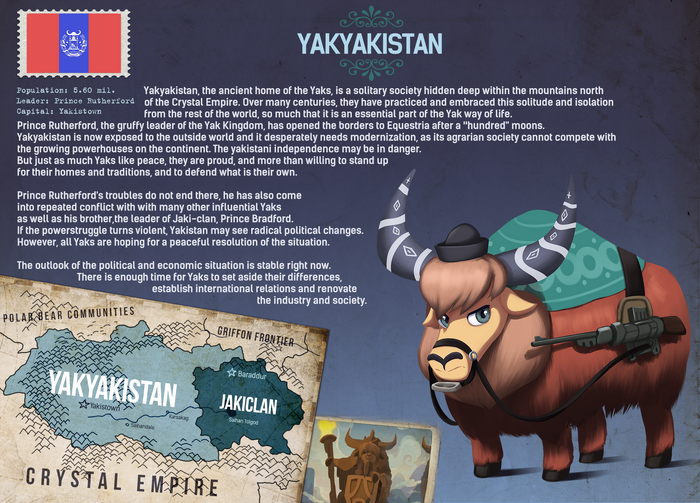 Yakyakistan, the ancient home of the Yaks, is a solitary land hidden deep within the mountains north of the Crystal Empire. Over many centuries, they have practiced and embraced this solitude and isolation from the rest of the world, so much that it is an essential part of the Yak way of life.

However, in 1003 ALB, Prince Rutherford, the gruffy leader of the Yak Kingdom, did the unthinkable. He opened the borders to Equestria after a "hundred" moons". This opening was a success, and the Yaks slowly opened up to the Equestrian way of life, as Prince Rutherford embraced harmonic institutions. In 1005, when Yakistown was devastated by an avalanche, Equestria was able to forge ties with the Yaks via Pinkie Pie, who was appointed official Friendship Ambassador to the Yaks.

In 1006, conservative and traditionalist members of the Yak Council declared independence under Rutherford's brother, Prince Bradford, angry with his Equestria-aligned policies and what they perceived as his destruction of the Yak way of life.

Divided by outside intervention, the land has split in two, divided between the

Kingdom of Yakyakistan and the secessionist

Jaki Clan in the east, promising to be a bulwark of tradition and isolationism.

Rutherford wants peace, but the Jakis are preparing for war, and soon, Yakyakistan might be thrown into a conflict they cannot afford. Industrialization, their society, the army - it is all currently in disarray. By force or diplomacy, the conflict must be ended.

The Jaki-Clan is in a difficult position. Small and low tech, with Agrarian Society and only two research slots, it starts with 24.5k deployed yaks in 5 small, poorly equipped divisions, including 1 mountaineer unit and 23.5k available yakpower.

It faces an easy first war against Yakyakistan - war with AI-controlled Kingdom of Yakyakistan can be very fast because it cannot fully control the frontline and there will be free spots to go through to its capital and big cities with some support of frontline divisions.

But after this, it may face the unstoppable might of the

Changeling Lands to the west, and the modern nations of

Stalliongrad to the east. The Jaki-Clan political tree is isolationist - players will need to manually justify or conquer via defensive wars to expand.

Jaki-Clan has strong focuses to catch up in technology, good national ideas and can boost its mountaineers. Unfortunately it does not have good defensive terrain - only mountains in Yakyakistan. Expanding opportunistically through manual justification or a lucky defensive war, especially against Nova Griffonia is needed to build up a industrial base.

The total branch will take 1050 days to complete and includes a research slot (More Schools).

It is recommended not to take the Kick Off Foreigners focus until it is needed - the event won't give bonuses and will cost PP while not at war.

Once Jaks have annexed Yakyakistan, the economics tree can unlock Modern Society and Developed Science Base at the end of the tree with A Modern Yakyakistan(973 days), and an extra research slot with Import Teachers (504 days)

The Jak military tree is relatively fast and contains a variety of tech boosts essential for making up for the deficit in tech. There are unique bonuses to boost effectiveness in mountains and allow the army to field more mountaineers. It also contains reductions in production cost (Building a Better Gun,Jaks Love Cheaper Howitzers and Tank Experience)

The airforce tree gives typical bonuses to tech, airfields and plane production. There are no focuses that grant aircraft.