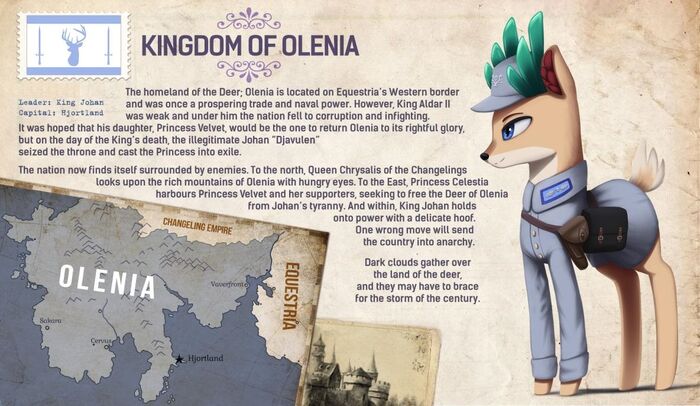 The land of Olenia is an ancient one. It can trace its lineage back to 2 BLB, when King Harald Fairantlers of Hjortland united several petty deer kingdoms. Olenia has since been a seagoing nation, with bustling trade ports.

In the early days the deer launched regular raids against

Equestria, plundering their sea villages with longships. However, in 143 ALB, a permanent peace was signed, although occasional unauthorized raids have occurred since, and the two nations relations have remained somewhat standoffish.

To the north, occasional incursions from the

In spite of these raids, the Kingdom has generally been at peace, a nation of relative stability on Equus.

The deer began industrialization alongside Equestria, quickly becoming famous for their production of durable electrical equipment. While not as fast or as efficient as their pony neighbors, Olenia remained a generally modern nation of factories and industry.

Since the restoration of the Equestrian Diarchy, the Daughter of Aldar II, Velvet, became interested in Equestrian Harmonic Principles, with Equestria being eager for her future ascension as Queen.

To everyone's surprise, however, King Aldar II died under suspicious circumstances, with his illegitimate bastard son Johan quickly seizing the throne with the help of religious leaders, corrupt businessdeer, and greedy nobles. "Queen" Velvet, the rightful heir, was forced to flee to Equestria.

The crown sits uneasy on Johan's head, as he faces pressure from all sides. Velvet attempts to rally support with the superpower of Equestria, the people grow tired of his rule, religious leaders wield a large amount of influence, and the corrupt businessdeer hold back the economy. Worst of all, the Changeling Lands have done something that has never occurred before in recorded history, uniting under one banner, and grow stronger every day.

One way or another, something is going to change. Who will force that change, however, remains to be seen.

These branches are summarised below. Some of these branches include sub-branches, designated in the effects as L (Left) and R (Right)

*For the Placate the Godar path, there is an event to deal with Johan, that includes the following choices (not shown in the details above):

Once the instability is resolved, the Changeling Threat and Approach Chrysalis focuses will become available.

The Industrial Tree is listed below. It notably includes several focuses around fortifications. Players should be careful of focuses which grant infrastructure, which can be counterproductive giving the Changelings Critical Infrastructure they need to push into the unforgiving Olenian Territory. However, they may also allow you to station more troops in low infrastructure areas to hold back the tide.

*This line is to the north of the Hjortland Peninsula. It leaves 6 provinces, all bordered by river, undefended to the west.

Olenia has a unique but standard Army, Navy, and Airforce Tree. Due to the speed of the likely Changeling Invasion, the player will have little reason to pursue the Air or Naval Trees early game.

The Army Branch supports a Mobile Warfare or Superior Firepower focus, providing research speed improvements. Notably, Haakon's Tank Experiments, the third focus in the tree (mobile warfare), provides 3 Light Tank Divisions (4xTank Battalions), for a total of 720 Light Tanks. The last mutually exclusive focus in the Superior Firepower branch, however, will give a bonus to artillery.

Military - Olenia starts off with 103.6k deerpower deployed, with 63.76k spare for recruitment.

The Airforce has 75 Early Fighters and 30 Early Tactical Bombers, with the Navy having 5 Cruisers, 4 Destroyer II ships, 6 Destroyer I ships, and 4 Submarines.

All branches of the Olenian Military are extremely weak at the start compared to its neighbors. The Army is sufficient enough to mount a small defense of vital territory, but nowhere near enough to guard it all, let alone launch a counterattack.

The Olenian Player will need to make use of the few advantages the deer have - excellent mountaineers, winter resistance, decent generals, a Chief of Army with +15% Defense, with some focuses and other Military Staff orientated around a fort building strategy. Olenia has extremely poor infrastructure, which can be used defensively. The deer racial tech may also prove incredibly useful in this situation.

Industry - Olenia's Industry is incredibly weak at the start of the game. Your only boost for a while will be trading thanks to the large number of resources you can extract. At the same time, your national spirits will impede your growth due to the debuffs they apply. You should aim to get rid of them as soon as possible in order to undertake the expansion of the Olenian Industry, and make use of your massive resource base.

Internal Civil Wars - Communist or Harmonist Civil Wars can be triggered by taking the respective paths. Both of these have a 10% chance of Johan stepping down peacefully, averting the civil war. The rebellion receives 60% of the nation's military strength, giving them a small but decisive advantage. Both have options to request help from Stalliongrad or Equestria as appropriate, which will give the nations an option to provide nothing, 500 guns, or 500 guns and 5000 volunteers.

Equestrian Coup - Equestria can trigger a civil war by taking the Stage Coup focus. This will start a Harmonic Coup D'état with 70% of the nation's military strength. Note that this can happen regardless of other events or political stability in Olenia unless it is already Harmonic. If an Equestrian supported Queen Velvet ascends, Equestria will request Olenia become a Dominion, although the player can just join the United Ponies Front, or outright decline. In the case of a civil war, the player should focus on capitulating the enemy as fast as possible, due to the impending Changeling Invasion (if the Changelings are not Harmonic).

The Changelings pose a massive threat to Olenia, and can challenge even expert players, primarily due to their ability to declare war very early in the game (504 days if rushed). WIth a Historical Path the Changelings will move quickly.

Shortly before the war begins, the Changelings will demand two border states of Olenia. There is no benefit to giving the lands to the Changelings as they will declare war shortly after regardless, with refusing to cede them denying Chrysalis of some PP.

Fight (Alone) - Fighting alone against the Changelings can be extremely difficult without adequate preparation. In theory, the mountains, cold weather, low supply, and support all provide fertile ground for defense. However, the Olenian Army is so small that careful deployment is key. Currently the best tactic to hold the AI is to fortify and defend a corner of Olenia, which includes the Hjortland Peninsula, allowing the Changelings to advance. This can be manageable as Chrysalis's starting Army and Industry cannot overcome an entrenched Olenian Army, buying time for the player to tech up their infantry and counter-attack.

Fight (Equestrian Support) - Equestrian support will make the fight against the Changelings much more winnable. This can be achieved in two different ways:

The war is much more winnable, but the player should still be sure to act carefully against the Changelings, and not become careless.

Submit - Submission is also an option, albeit a dishonourable and dangerous one. Only Johan can pursue this option. In the submission path the first focus will gain a NAP., with the second one turning Olenia into a Satellite. After a victory against Equestria, Olenia may request several territories from its Changeling overlord, though the Changelings are likely to be stingy.